Back in September 1939, at the outbreak of World War 2, the British public couldn’t have imagined the resulting food shortages that led to a system called rationing, which continued long after the conflict ended in 1945.

The problem was that in the 1930s, Britain imported around 55 million tons of food annually. Just before WW2, the British population consisted of between 46 and 52 million people, and around 70% of their total food supply was imported. This included 91% of butter, 80% of fruit, 70% of sugar, cheese and cereals, and 50% of meat. 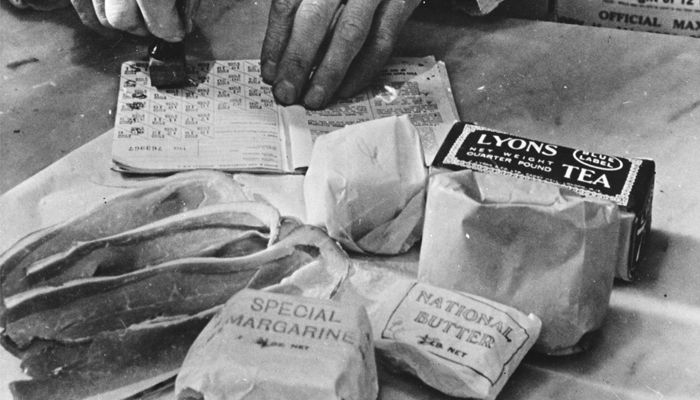 Supplies from across the globe were dependent on shipping lanes remaining open. However, after war was declared, German submarines started attacking the food supply ships heading to Britain. This left the government with a headache, as they had to make sure everyone had sufficient to eat, while allaying public fears that prices would rise. There was also a danger that richer people would hoard food, leaving the shelves empty for the poor. It was obvious that something had to be done, and quickly!

Led by William Morrison, the Ministry of Food introduced a system of rationing to ensure everyone received an equal share every week, no matter what their social status or income.

How did the government prepare for rationing?

Researchers from Cambridge University used themselves as guinea pigs in December 1939 to determine whether rationing food would work, or whether the population would get ill.

Paediatrician Robert McCance and nutritionist Elsie Widdowson were the chief researchers. They exercised strenuously outdoors, simulating the exertion of manual work, while eating less food to see how it affected them.

They took longer to eat their meals, as they were consuming more potatoes and bread than normal to bulk up their calorie intake. They remained in good shape and concluded the rationing proposed by the government wouldn’t be detrimental to public health.

On the contrary, people’s health improved, life expectancy rose, and infant mortality declined because everyone was accessing a balanced diet of healthy foods with plenty of vitamins, while eating less sugar and unhealthy snacks.

When did rationing begin?

On 8th January 1940, food rationing was officially launched. The first items to be limited were bacon, sugar and butter. All meat was then rationed by 11th March.

Morrison was replaced as Food Minister by former social worker and managing director of Lewis’s store Frederick Marquis in April 1940, as he had a good track record of communicating with consumers.

In July 1940, margarine was rationed, followed by jam, cheese and eggs in 1941. In 1942, dried fruit, rice, peas, tinned tomatoes, sweets, chocolate and biscuits joined the list. Other non-food items in short supply were also rationed, including petrol from the start of the war, clothing from June 1941 and coal from July 1941. So many miners had joined the armed forces, there were too few left to mine enough coal for the nation.

Soap rationing began in February 1942, because its manufacture required oil and fats and they were being used for food instead. Gas and electricity were rationed in March 1942.

How did ration books work?

The Ministry of Food introduced ration books, enabling people to buy scarce items. Every person received their own individual ration book, containing a number of coupons, each stating precisely how much food the shopper was permitted to buy.

Shoppers had to register at their chosen local shops. Every shopkeeper was provided with the exact amount of food for registered customers only. Ration books had to be presented at the counter, along with the relevant coupons. Without them, customers couldn’t be served.

Each shopper could purchase other meats up to the value of 1s 2d a week – the equivalent of around £2.60 in today’s terms. This would buy a couple of chops. Every four weeks, each person could buy 12oz sweets, while every two months, they could purchase 1lb of jam.

Although this doesn’t sound much, households adapted well to rationing. New, nutritious, cheap wartime recipes were created, based on what was available.

In addition, the government launched one of its most famous wartime campaigns. Dig for Victory encouraged people to grow vegetables such as carrots and potatoes in their own garden, on allotments and in public parks.

The Ministry of Food helped people to make the most of what they had and launched the Waste Not, Want Not campaign on the radio. People could supplement their diet with other foods that weren’t rationed, such as fresh fruit and veg.

Whereas shopkeepers today try to make their shopfronts look as enticing as possible, during WWII, the emphasis was on keeping safe.

The government advised that people could be injured by flying glass if windows were broken during an air-raid. Many property-owners, domestic and commercial, followed the official advice and taped up their windows. Guidelines drawn up under the Air Raid Precautions Act suggested replacing regular glass with specially strengthened glass or celluloid when possible.

Sandbags were also placed outside shop windows and in doorways to provide extra protection for the ground floor, windows and doors in the event of a blast. If a shop’s windows were blown out, but the shop survived, they were often simply boarded up, as the shopkeeper wouldn’t take the risk of it happening again. Regardless of how uninviting the shops looked, people still shopped there in their droves, of course, as they desperately needed to purchase the food.

When did rationing end?

It took years for Britain to recover, even after the conflict ended in September 1945. Rationing was kept in place until 1948 and was then gradually phased out so that there weren’t sudden food shortages.

It was May 1950 before the majority of foods came off the rationing list, including mincemeat, dried and tinned fruit, jelly, chocolate biscuits, treacle and syrup. Soap rationing ended in September 1950, but tea was rationed until October 1952. Among the last items to come off the rationing list were sugar and sweets in February 1953. Food rationing did not officially end until 4th July 1954 – nine years after the war was over.

On 11th November, the Commercial Aluminium Shopfronts team will be observing the 2-minute silence as a mark of respect for the brave men and women who lost their lives in times of conflict. We will remember them.