Will the High Street make a Comeback?

More than 17,500 chain store outlets disappeared from Britain’s high streets, retail parks and shopping centres in 2020, as a result of the Covid-19 pandemic. The lockdowns caused average daily closures of 48 shops, restaurants, hospitality and leisure venues.

It was the worst decline on record for the high street, according to data compiled by the Local Data Company and accountancy firm PWC, covering England, Scotland and Wales. The 17,500 closures were permanent and came as a direct result of the pandemic. 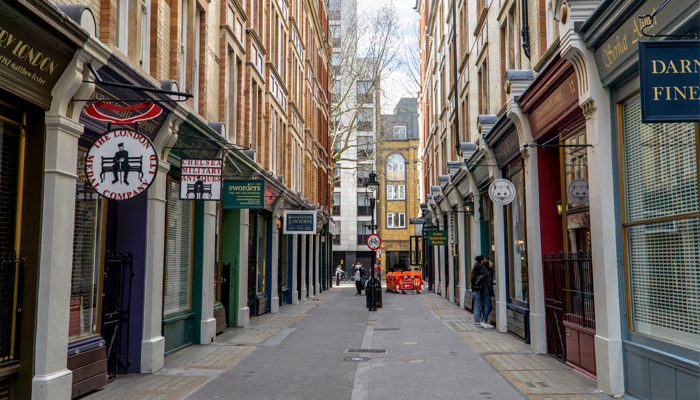 However, the high streets were already struggling even before the virus struck early in 2020. It only served to accelerate their decline. Forty years ago, pop band The Specials sang about “ghost towns”, bemoaning urban decay and the decline of inner-city areas. The sentiment is still as relevant today – perhaps even more so.

When non-essential shops had to close during the three lockdowns, this led to a boom in online shopping. The final figures of the impact of Covid-19 on Britain’s high streets are still not fully known. Some of the shops that were temporarily closed have not been counted as shut forever yet. However, they may never be able to reopen because they have lost so much money through the closure.

High streets are looking very different since the third lockdown was relaxed in April this year. There are empty premises, after months of temporary closures have turned into permanent closures in some areas. A switch to spending online and digital services have been cited as major reasons for their demise.

Which chain stores have been affected?

Big chains have been affected as much as the smaller independent stores. Debenhams, Laura Ashley, Topshop, Dorothy Perkins, Burton and John Lewis have all been impacted by the pandemic.

The entire Debenhams high street chain closed after trading for more than 240 years. At its peak, there were more than 150 Debenhams stores across Britain. However, falling sales for several years led to the chain going into administration in 2019, although some of the high street stores carried on trading.

Although fashion retailer Boohoo bought the Debenhams brand in January 2021, the remainder of the department stores had been closed down permanently by May. Founded in London in 1778, the lockdown finally finished off Debenhams, which has continued online only.

John Lewis has also been affected, with an initial eight of its 50 high street outlets closing permanently in 2020, followed by a further eight. The retailer is attempting a comeback in 2021 by launching its Anyday discount range. Staff didn’t receive a bonus for the first time in 67 years in 2020 due to the pandemic.

Topshop permanently closed its high street stores this year, following the collapse of Sir Philip Green’s Arcadia Group. In 2020, Laura Ashley also announced it would permanently close 70 stores, after 67 years, with the added loss of 268 office jobs. The company blamed coronavirus for tipping it over the edge.

Dorothy Perkins, Wallis and Burton’s stores also closed as a result of the collapse of the Arcadia Group. They were all bought out by Boohoo to operate as online-only brands. This meant the loss of around 2,500 jobs when the announcement was made in February 2021.

Fashion retailers were hit particularly hard in 2020. More than 1,100 stores disappeared from the high street in this sector including Warehouse, Jaeger and Oasis. Pubs, bars and restaurants were also affected, with big names such as Pizza Hut, Pizza Express and Burger King announcing the loss of some physical premises.

Return of the high street

One of the biggest online brands to grab a high street presence recently is Amazon, with the opening of its three Amazon Fresh stores in London. The first bricks and mortar store outside of the US opened in Ealing in March 2021, followed by a second store on Wembley Park Boulevard. The third shop has opened near the White City tube station, comprising 2,500 sq. ft. There is no till in the shop: customers enter using the Amazon app and shop for what they need. They can bag their items and then leave without using a till, as they are automatically billed to their Amazon account as they depart.

The stores, which sell food, have grown in popularity very rapidly. The company says it is excited at how much customers like the new venture and plans to open more in the future.

In a surprise twist on 16th June, media reports surfaced that Boohoo might be planning to resurrect Debenhams on the high street. There is talk of one store opening outside London as the new owner endeavours to strike up deals with more beauty brands.

Reportedly, some beauty giants are reluctant to supply their products to Debenhams without a physical store. Before leaving the high street, Debenhams was a market leader when it came to beauty. Now it can’t sell brands including Yves Saint Laurent and Chanel on its website, due to no longer having a high street presence.

Boohoo Group chief executive John Lyttle said the firm was in talks about opening a Debenhams store, although the location hasn’t yet been revealed. This shows the value that some companies place on having a high street presence.

How can retailers encourage shoppers back into their stores?

After such a long period, when non-essential retailers were closed, many consumers have got into the habit of shopping online. High street stores are now planning how to encourage shoppers back into their premises again.

Arguably the most important way is by having an attractive and welcoming shopfront that will catch people’s eye and turn passers-by into customers. First impressions count and retailers have only one shot to grab pedestrians’ attention and attract them into their premises. Visibility is the key, so whether you go for a glass shopfront or a glazed shopfront, make sure it’s well-lit and striking.

Adopting a degree of subtlety can ensure your storefront is inviting, warm and welcoming. After the long-term disruption of the pandemic, there will be huge opportunities for clever brands looking to use exciting window display concepts.

Despite shopping habits having changed during the lockdown, local communities want to save their high street because it is so much more than just a row of shops: it is also a meeting place, somewhere to socialise and a place where community spirit is fostered.

A report in 2020 by the government’s High Streets Task Force, run in conjunction with the Institute of Place Management, said even before the pandemic, the number of people visiting the high street had dropped by around 20% over the past ten years.

It was suggested one reason was the fact shopping centres were starting to lose their individuality, as they were dominated by a small number of large chains. Local communities want the town centre to be somewhere they can shop, work and spend leisure time, with businesses pertinent to their individual needs.

Although there is no doubt it will take money to regenerate many run-down town centres, it is something local people are crying out for. Last year, the government revealed the town centres that were going to benefit from regeneration funding from its Future High Streets Fund from a shortlist of 100 hopefuls.

All over Britain, small green shoots of recovery are starting to surface; it’s up to retailers to nurture them!