Car showrooms are a vital part of the car-buying experience: nothing can beat being there in person and seeing the gleaming bodywork of rows of shiny new cars. A good showroom makes it easy and exciting for people to browse and choose their dream vehicle. 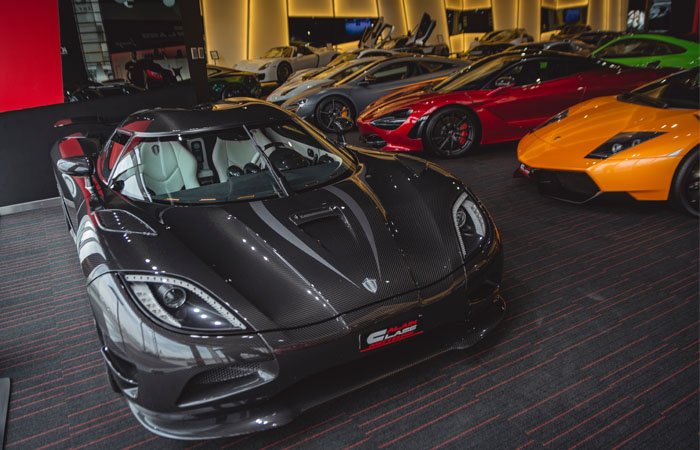 When it comes to the world’s best car showrooms, there are some unique and innovative examples that house the classiest cars on the planet! Read on to discover the perfect luxury motor destination…

The television show, Top Gear, voted Dubai’s Alain Class Motors the best car showroom in the world. Famous for attracting customers who live luxurious lifestyles, the 10,000 sq. ft showroom, on Sheikh Zayed Road, is full of the rarest supercars on the market.

The Dubai showroom is the main one of five Class Motors’ showrooms in the United Arab Emirates. Owner, Abdullah Al Ketbi, pledges he can find buyers any car they can think of. A car enthusiast and collector himself, he started trading luxury cars in 1992. He began by importing Mercedes Benz from Germany and sold them to friends and family members. In 1995, he opened his first showroom in Alain.

Amsterdam-based James Edition deals in pre-owned luxury and exotic cars, selling to billionaires and millionaires all over the world. It specialises in supercars, ranging from £2.4 million for a 2019 McLaren Senna, down to £169,000 for a 2020 Aston Martin Vantage.

The total value of its cars runs into billions of pounds and they are described as “the most extravagant cars you could dream of”. Sadly, dreaming about them is probably all that most of us can do!

Autostadt is Volkswagen’s theme park and a visitor attraction in its own right. Two 20-storey glass towers house the showroom and play a key role in the whole experience. Within the spectacular towers are 800 newly-built VW cars awaiting delivery.

Each car is transported to the towers from the nearby manufacturing plant by a high-tech underground conveyor belt! A giant robotic arm moves each car into its designated space, making that a spectacular experience in itself.

Like everything in Las Vegas, its luxury car showroom, Ferrari Maserati of Las Vegas, is big, bold and brash. Dripping in wealth, it displays extra-special supercars on rotating platforms, with other cars sectioned off by luxurious velvet ropes to create an exclusive ambience.

Citroën’s flagship showroom in France is only 25 metres wide but makes up for this with its spectacular towering height. Inside, its white walls and floors make it look like a tall, futuristic ice palace. Featuring seven rotating platforms as you ascend the floors, each displays a classic Citroen design throughout the ages.

Located on the Avenue des Champs-Elysees in Paris, the amazing showroom was renovated and redesigned by architect Manuelle Gautrand into the spectacular interior of today. The current premises opened to the public in 2004, but company founder André Citroën displayed his first automobile, the Type A, there in 1919.

One thing all of these spectacular car showrooms have common is the fact they understand how crucial it is to have an eye-catching shopfront – the first impression customers have when they arrive at your premises!

Whether you own a luxury high-end showroom or a local motor dealership on the high street, make a lasting impression with an aluminium shopfront. Strong and reliable, aluminium is rust-resistant and corrosion-proof. Durable frames can be created in thin, stylish designs that not only look great; they offer excellent energy efficiency too.