As one of the most famous Christmas songs ever written; just about everyone has heard Baby It’s Cold Outside.  It has been covered by the likes of Dean Martin, Ella Fitzgerald, Tom Jones and Lady Gaga, but probably the most famous version is by Canadian crooner, Michael Bublé.

Bublé has loved Christmas ever since he heard Bing Crosby’s White Christmas as a child. His parents played the song over and over again, not only instilling the magic of Christmas in young Michael, but also introducing him to music in general. 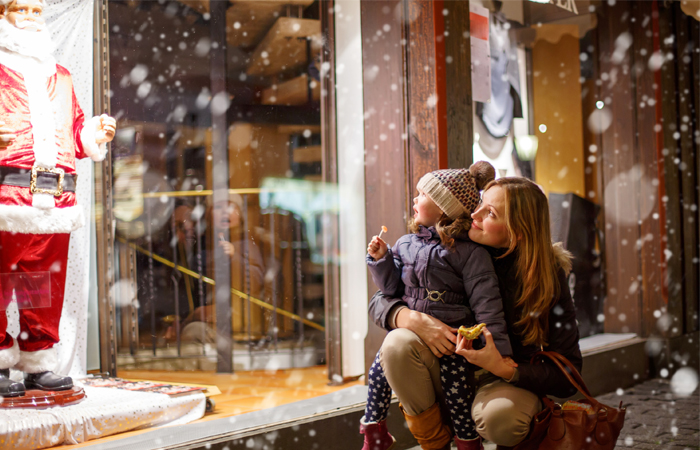 By the time he was 16, he was singing in local nightclubs. At the age of 18, he won the Canadian Youth Talent Search. He hit the big time in 1997, when he starred in TV documentary, Big Band Boom.

In 2014, Michael released Baby, It’s Cold Outside as a duet with American actress and singer Idina Menzel. Frank Henry Loessea wrote the song in 1944 and it has stood the test of time, as its lyrics are just as relevant today.

Commonly regarded as a festive song, it has a theme of cold winter weather and keeping warm indoors.

Today, with the Met Office predicting wind and rain up to Christmas Eve and a chillier snap starting on Christmas Day, it really will be cold outside. However, people will still want to go Christmas shopping, despite the winter weather.

With consumers out and about determined to spend money, whatever the weather, how can you make your shop more enticing to passers-by?

A tried and tested means to success in the retail sector; never underestimate the importance of a welcoming shopfront. Turn passing footfall into customers by sparking their interest with your window display.

Despite the digital age, in-store shopping is just as popular as ever, with 56% of people surveyed saying they prefer the in-store experience over buying online. When it comes to food shopping, 86% of customers prefer buying it fresh in-store, while 60% of us like going out to buy clothes.

Give customers an even warmer welcome! Automatic doors not only make it easier for customers to enter and leave when laden down with bags, or with small children in tow; they also accommodate higher footfall at busy periods.

Automatic doors let people with a disability enter your store with ease. They will also ensure you comply with the law! A real energy saver, they help to keep the heat in by opening only to allow people through – a much better option when compared with leaving manual doors continually open in cold weather.

Having a cosy environment is a great way of welcoming shoppers. In the words of the song, “Look out the window at that storm,” – make sure your customers understand how much better off they will be in-store.

Offer customers something to prolong their stay: “I’ll take your hat, your hair looks swell,” is something to think about if you’re running a restaurant.

When customers walk in to escape a blustery, cold, wet day, make sure there’s somewhere to hang their hats and coats. No one wants to sit at a table with wet coats hanging on the back of their chairs.

Little things count when it comes to having the edge over the competition. Make sure you leave people with a lasting good impression of your business by wishing them goodbye.

“This evening has been so very nice,” might be lyrics from a song, but this is the impression you want to convey to your customers as they leave. Make them feel valued and tell them you look forward to welcoming them back again next time.